Greek-themed burgers in Canada with a hot twist! 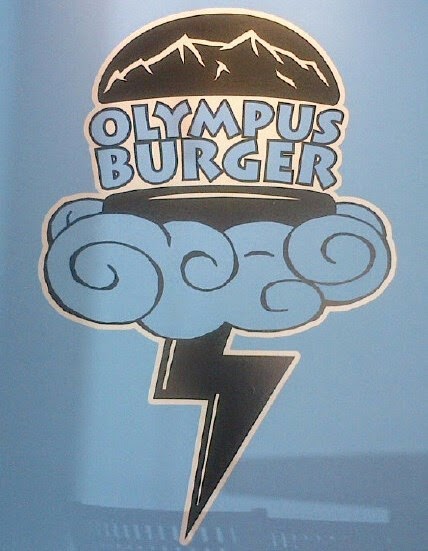 Just talked out of the "Labour of Hercules" Challenge, something I would never have expected from a charming hamburger joint in Port Hope, Ontario, called Olympus Burger. You have to eat a 6 oz. beef burger with Canadian bacon, lettuce/tomatoes, caramelized onions, jalapeños, habaneros, and secret Olympus hot sauce -- in 15 minutes w/one glass of water, after you have signed a waiver. If successful you become a "Demi-God" and get a free OB t-shirt.

Well, I was signed up until George described the Scorpion Trinidad (related to Ghost) peppers -- about 20 times hotter than a jalapeno -- that his family grew and used for the sauce. While I truly love and eat hot peppers/sauces regularly, it did not seem like their secret sauce would benefit someone being treated for gerd. Not to mention that only 65 customers out of 189 have managed to complete the Challenge so far.

So I settled for a 6 oz. beef "Hades" burger with roasted red peppers, jalapenos, and chipotle bacon sauce in a beautiful whole wheat bun; they gave me a side of the secret hot sauce so I could test my mettle. Very juicy, tasty burger -- and hot enough for now, efharisto poli. A combo w/very nice home-cut fries and unlimited pop is $10.50..a very good deal for such quality food.

(Have yet to try the "Olympus poutine" with Canadian bacon, caramelized onions, the cheese curds and Olympus gravy over home-cut fries. Or the "Olympus fries" with feta cheese and special Olympus sauce, very poutine-sounding in itself. And other Greek-themed burgers/sandwiches sound fab -- like Hermes [w/feta], Athena [lamb], Zeus[loaded!], Artemis [chicken], and Hera [vegan]...For even more choices, click here to access the OB secret menu.)

Next time, maybe The Challenge -- or better yet, I might get to see someone else try it :)  In the meantime, Double Opa for Olympus Burger!

NOTE: George's family is from a village near Sparti, and he admits that super hot is not really a Greek thing. Then again, he did not know my jalapeno-addicted father, Steve -- who would have signed that waiver and become #66 in about 2 minutes!
Posted by Paula at 4:18 PM