Paula's Breakfast Poutine, and a Greek one, too! 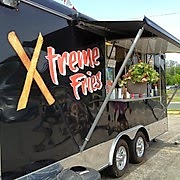 When I first discovered poutine in an early trip to Canada, I was in my total glory...French fries, a light meat gravy and cheese curds (not exactly a snacking option on their own, come to find out) -- how could I ever go wrong? And when stopping by the X Treme Fries truck near the Port Hope Town Hall, I dared to ask for mine with the sweet potato fries. The proprietress looked at me kinda funny, but said OK for just 50 cents more. Delicious, and now on the truck's menu, I think..(BTW: Fries trucks are prolific throughout Canadian towns and countryside,  mostly in one location -- long before food trucks became prolific in Miami!)


After that, I began to not only seek out poutine, but also discover different takes on the originally-from-Quebec dish. You can get poutine everywhere, including McDonald's! Olympus Burger adds Canadian bacon and caramelized onions, along with its Olympus gravy, of course. In Ottawa we encountered Smoke's (a Canadian chain) with so many varieties that I felt overwhelmed and like we were over-stuffing baked potatoes. The Oasis Bar & Grill in Coburg uses lobster for their "Not Routine Poutine" -- delicious and one of my favorites. And Wimpy's offers, among several choices, an amazing breakfast poutine not unlike a one-pot morning dish.

So I decided to make my own on Sunday morning -- with potatoes I had on hand, a can of Carrière "Poutine Sauce" from the local Dollarama Plus, some Empire cheddar cheese curds with red pepper/caramelized onion snagged at the Coburg Farmer's Market, and fried eggs. I nuked the potatoes some so that they wouldn't take too long (who could wait!) sauteing in the pan with butter and olive oil. Then added the previously-sauteed red peppers, hot peppers, garlic and onion -- resulting in something like glorified home fries. Drizzled some of the hot gravy on the potatoes, added the cheese curds, more gravy, the egg, and more gravy. You can add any meat, if you...Paula's Breakfast Poutine -- you, too, will lick the plate!

PS: Just recalled that one year up North I made Greek Poutine: oven roasted Greek potatoes (with lemon, olive oil, and plenty of oregano/garlic), avgholemono sauce and grated kaseri cheese -- OPA!
Posted by Paula at 10:39 AM