I was hardly disappointed to find out that my brother had arranged to pick up Chinese food for Xmas Eve. Having it on Christmas Day might have been more predictable for a family with Jews in the mix. But we non-Jews regularly blend right in with all the Jewish customs and are big Chinese food eaters going way back to our Stockton roots...So why wait?

(That same day, I received a very interesting article explaining why Jews eat Chinese on Christmas, a tradition begun on the Lower East Side of Manhattan about a hundred years ago. Among the reasons for that, the obvious: Chinese restaurants were the only ones open on Christmas (though not exclusively nowadays). Also something I had not focused on: Chinese food does not contain dairy. Read the article!)


Good Chinese food is hard to come by in some Miami neighborhoods, so just picking up a take-out order from the VERY popular "Tropical Chinese" was a feat -- wading through a sea of folks waiting festively to pick up or sit down. There is a large window looking out from the kitchen into the main dining room if you are willing and able to follow dizzying kitchen action happening around super-hot woks. I watched for awhile, wishing we were home at the dinner table already. Finally we did very much  enjoy our meal -- which included braised pork belly and Prawns in a Basket (oops!) -- before proceeding to "the next phase," as my niece called it: opening Christmas gifts :)


While in Stockton recently, I had (sort of) abandoned my constant craving for Mexican food and gone more for Chinese. Twice, the current Chinese restaurant of choice, Yen Du, was closed -- so where to go? In the first instance I picked New Canton Garden  (also 4 stars) from Yelp. It's not far from our old family home, and I must have passed this place hundreds of times. As mentioned in the reviews, it is nothing to look at on the outside. But the food was pretty good, especially the House Chow Fun and Pepper Salted Spareribs. The latter was something that my pal Debbie Buck and I had not been expecting. But the dish was quite tasty/spicy -- and reminded me of the chicharonnes we eat in Miami. The price was right at $7.25. I'll go back.

And just before I left Stockton, I was on the southeast side of town and decided (half-heartedly) to eat lunch at New On Lock Sam's (3 stars) on S. Sutter Street. That's the updated version of where we ate Chinese as kids -- in the original restaurant on Washington Street, after climbing up a flight of stairs and into a mysterious, smoky room of booths hidden behind red velvet curtains. The diminutive, feisty owner Ruthie always used to threaten, "If you don't finish everything, I won't give you as much next time!" Needless to say, we complied.

Eating there now could have been very disappointing. Ruthie and her family are long gone. The dining room was nearly empty at 1:30 pm -- and seemed a bit shabby as I looked wistfully toward the booth that I remember sitting in last with my parents, my aunt, Oly Spanos and Anthe Faipeas. Outside in a little rock garden area behind a large window, a German Shepherd was jumping up against the glass. Oy veh! What had I gotten myself into? And what was I going to eat? 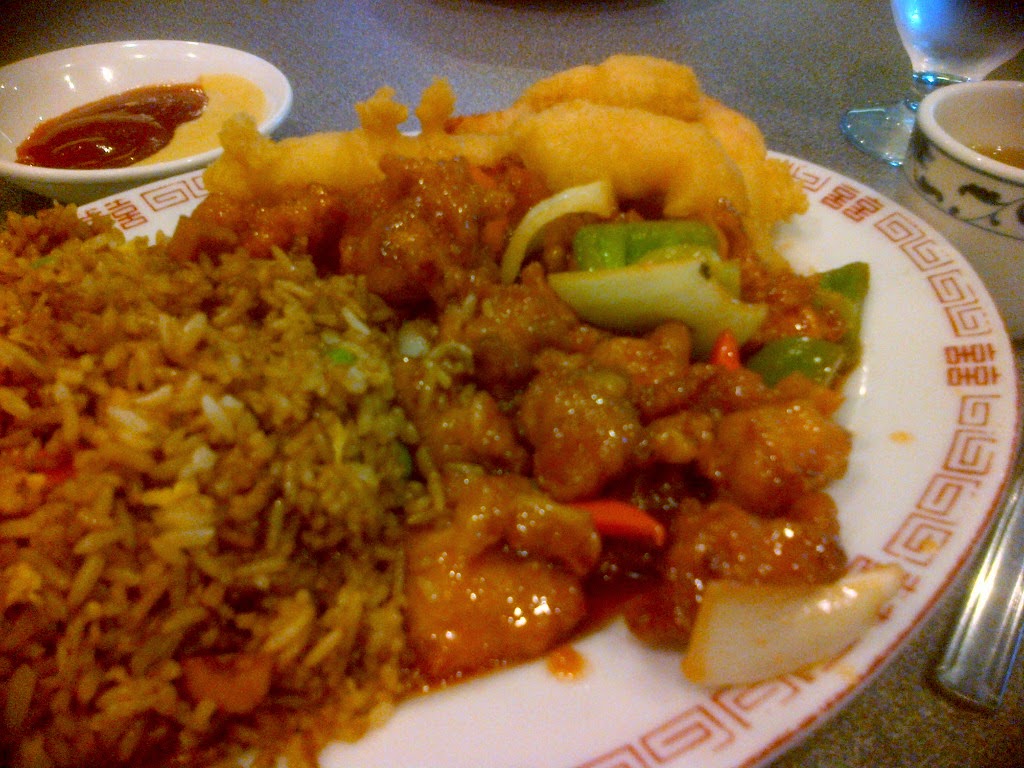 Then I saw it: Lunch Combo #2: consisting of sweet and sour pork w/pineapple (my mother's absolute favorite), fried prawns and pork fried rice -- all staples of our family visits so many years ago. The smell, the taste, and the little bowl of Chinese mustard/ketchup transported me back in time. Delicious, actually...and all for the princely sum of $7.90. I was not disappointed!

On the other hand, I just may leave On Lock's at that and quit while I'm ahead.
Posted by Paula at 7:59 PM No comments: 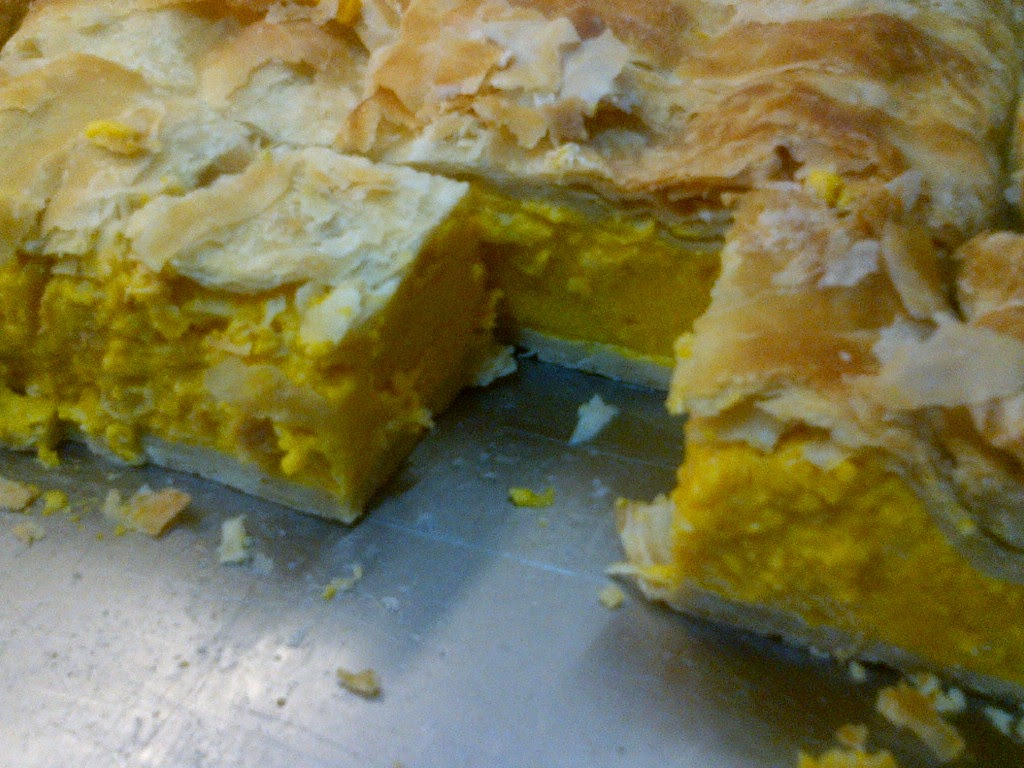 Memories of childhood always include my grandmother Pauline Xanttopulos' Banana Squash Pitta -- a "horiatiki" (village), rustic-styled creation with a crust made from scratch that is light in its own way due to multiple layers of dough rolled together. She depended on Crisco instead of the oil/butter mixture used back in her hometown of Naousa in Northern Greece...It's somewhat complicated compared to making pitta using fyllo dough bought at your neighborhood supermarket -- but well-worth the effort! Check out more details at my "Greek-American Family Notes" blog HERE.
Posted by Paula at 2:59 PM No comments:

On the road for awhile, I finally had an opportunity on 11/20 to eat lunch at Kokkari Estiatorion of San Francisco, a very well-known Greek restaurant. Just as I was starting to write this, I saw that Kokkari has been ranked Number One SF restaurant in the Zagat 2015 Survey -- dethroning long-time champ Gary Danko in a newsworthy Bay Area culinary coup. OPA!

I had made a date with my old friend Lori Durbin after being jealous every time she mentioned Kokkari on Facebook. Turns out that Lori was also familiar with The Dead Fish restaurant in Crockett. That woman does get around. But I digress...

Kokkari lived up to my expectations and then some. It's an elegant place with an Old World feel right down to the fireplace with a lamb roasting on a spit...not to mention an enticing display of killer rustic bread loaves. Resisting the temptation of lamb as it should be cooked, we decided to share mezedhes (appetizers).

Unfortunately, I couldn't get Lori to agree to one of all-time favorites, Fried Smelts (see photo at top of this blog) as served with skordalia. So we settled on Grilled Calamari stuffed with feta, fennel & orange with black olives -- sublime!

The always-always-hoped-for Horta (braised seasonal greens with lemon & olive oil), were good -- but under-cooked according to my over-cooked Greek vegetable preferences, which I realize are not particularly gringo-friendly. I would have also preferred dandelion greens.

The Eggplant Salad (Melitzanosalata) and Tzatziki were excellent -- and the lush pita bread that comes with them quite satisfying.

But the pièce de resistance was the Gigantes,  oven-baked "giant beans" with tomato sauce, olive oil & herbed feta. Lori became an instant a fan, even as I warned her that the authentic beans are hard to come by if you don't have a "Greek store" in your town. The package pictured here that I bought at Miami's St. Sophia Greek Festival for $6 is going on Amazon for $13.20 with Free Shipping directly from Greece. 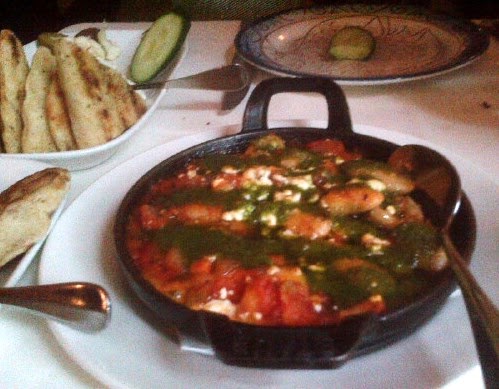 Kokkari added a new twist to the usual Gigantes dish that was not disclosed in the menu description (probably with good reason) and caught me by surprise: a generous drizzle of pesto over the top that at first provoked an anti-nouvelle cuisine knee-jerk reaction. The beans were pretty awesome, but I had still had issues.  No Greek cookbook I checked with -- including the game-changing, European-leaning "Greek Cookery" by Tselementes -- mentions Gigantes w/pesto.

Then a few days later I ran into Nick Thomas in my hometown of Stockton. His Greek father was in the produce business same as great-uncle Tony Gust and my father Steve. And, he said, after sharing various memories, "My mother made the best pesto!" So there you have it -- worthy of another OPA dedicated to trying something different if you know what you're doing. Bravo, Kokkari Estiatorion!

NOTE: Beans baked or cooked stove-top in tomato sauce have always been a favorite in my family. Indeed, "Mom's Gigantes" -- found on Page 68 of the St. Basil's "International Cookbook" (2010) -- is a testament to that. But they were usually made with dried large lima beans or even frozen limas. No "Greek store" in Stockton after the Fotinoses closed theirs...