If you haven't read Provence 1970 by Luke Barr, you must...It's a brilliant description of 3 winter months spent in the South of France by culinary luminaries who changed the face of American cooking. Just ask Alice Waters!

Barr is the grandson of MFK Fisher's sister Norah, and he somehow pulled this mouth-watering narrative together from interviews, letters and articles as painstakingly corroborated in pages of footnotes -- and lovingly quoted throughout the book to lend both credence and context to his story. In 1970, Fisher -- an eloquent food writer, with 27 tomes to her credit -- was traveling with Norah both for nostalgia's sake and also to decide what to do with the rest of her life. She was 62.

They met up with Julia and Paul Child, Simone "Simca" Beck, James Beard, Richard Olney, and food editor Judith Jones -- all Americans except Beck. Regardless of their idiosyncrasies, the fellow travelers got together in each others homes away from home, cooked meals for each other, and talked into the night in simple unencumbered surroundings -- something that was not done much any more Stateside even then. (Indeed, the members of the Travel & Recipe Club at the Brockway Memorial Library recently discussed the book and cooked a beautiful shared meal, wishing that they did that more often these days themselves.*)

Times were indeed a-changin'. Julia Child, with her successful TV show and other enterprises, had already begun to back away from what was extolled in Mastering the Art of French Cooking (2 volumes) which she had written with Beck. "Simca" was not happy about that -- and more so the dedicated francophile Olney, who had recently written The French Menu Cookbook and lived in a house he renovated there in Provence with a wine cellar that he spent 6 years digging himself!

Mary Frances Kennedy Fisher was food-obsessed:"After breakfast she was on her own. And MF continued to be troubled by food. The look of it. The constant search for it." (p.184). On top of that, she was in the throes of doubting her heretofore dedication to French life. In December, 1970: "She had made up her mind. 'I do know that I have, apparently, turned my back on the old vague dream of establishing myself in S. France, as I once dreamed.' " (p.196) She then went home and established herself at "Last House" in Glen Ellen, California, where she died in 1992 at the age 93.

In 2010, Barr took Grandma Norah, his wife and daughter back to Provence for a look at the various homes where the food icons had stayed, including Child's "La Pitchoune" (which by then reverted back to the Beck Estate). He and his guests to some extent relived the spirit of 1970. But while some things never change, others are gone forever... 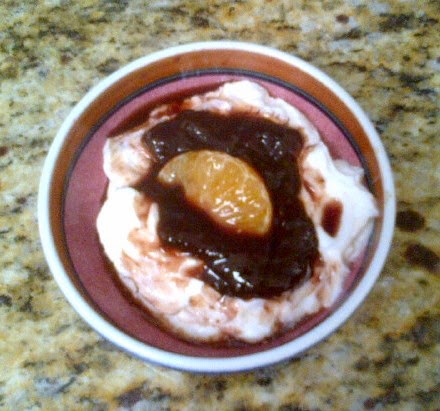 *Tribute Dessert: On p. 11, MFK Fisher talks about her love for tangerine sections. And on p. 232, Barr reports on a simple country meal she had prepared for her famous friends, including Ice Cream w/Pureed Plums. Searching for a connection, I took a recipe for Prunes Poached in Red Wine (which included orange zest in the prep), pureed the prunes, put them over vanilla ice cream, and added a tangerine section. My tribute to MFK Fisher!
Posted by Paula at 5:50 PM