Today I observed the Assumption of the Virgin Mary by recalling one of the the seminal experiences of my ten years in Greece (68-78): A pilgrimage to Panayia Soumela on August 15, 1973, to both observe an important religious holiday and revel in Pontian culture.  (For the background on those amazing people from the Black Sea, please click here to visit my other blog.)

In that same vein, I rediscovered a recipe card entitled "Miliasta (Sonia's Aunt)" and fell further back in time with vivid memories of many meals at Greek village tables. Visits to Pontian households were special on several levels. And even though I usually could not understand what Pontian yiayias were telling me due to an Ancient Greek-based dialect, they always knew that I loved their cuisine.

I especially loved "Miliasta" -- which is a soup of Pontian staples including Korkota (dried or roasted cracked corn), dried beans and greens. It has the added attraction of calling for a hot pepper. Opa! 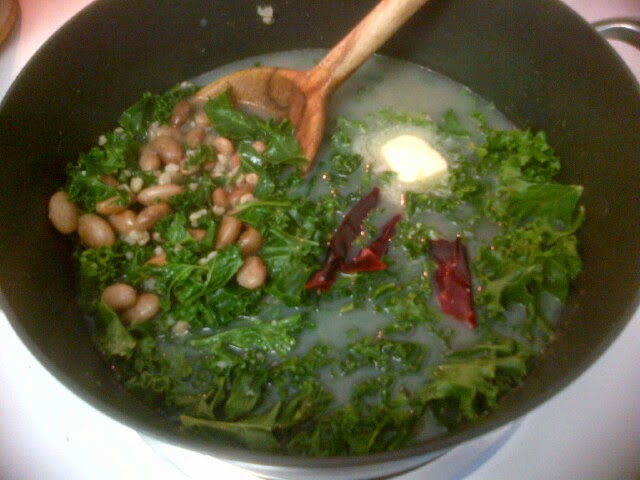 What did I have on hand to make this Ancient Greek soup? No dried crack corn, but plenty of "chicos" (dried small corn) that I had bought from Tina Martinez in Santa Fe. So I broke 1/2 c. down in a food processor. The recipe called for finely chopped cabbage, and I had about 1/2 pound of cut kale in the fridge. These were cooked with 1 cup of dried pinto beans -- to which I added a pinch of salt, 1 T. of butter and 1/2 dried hot Sandia pepper purchased from Nellie Herrera in Belen.

And that's how East met West on August 15th in honor of Pontian Nation.