Yesterday finally dawned on my long-awaited date with David Sterling's highly-touted Los Dos Yucatecan Cooking School in Merida,* the capital of the Yucatán. I had signed up for an 8-hour class entitled "Taste of the Yucatán." What an amazing adventure!

Just don't refer to this area as Mexico's Yucatan peninsula. Chef David made the Mayan-rooted independent character of the Yucatán abundantly clear -- a socio-political state-of-mind handed down throughout the rich (and sometimes troubled) history of this special place, as keenly illustrated by a unique and rather thrilling cuisine.  (I am still reeling from a lunch today of "Longaniza de Temozon" and "Queso Relleno Negro" at El Manjar Blanco, but once again I digress...)

In an opening 90-minute lecture, Chef David spoke exhaustively and lovingly about the Yucatán and the foundation/details of Mayan cooking. He also elaborated on the European and Caribbean influences. I don't think he took a breath the whole time. Me neither. 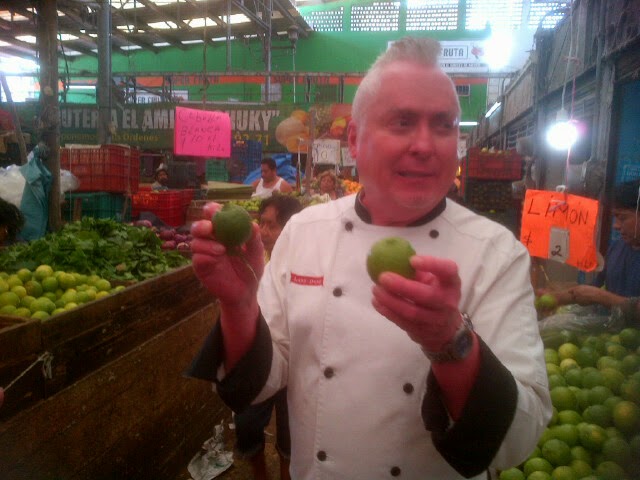 Our merry band of acolytes + chef then made a 60-minute foray into the Lucas de Gálvez Market to purchase some the day's provisions -- but mostly to learn more about a dizzying array of available foodstuffs/spices and where to find them. There is, for example, a big difference between the fragrant lima used in the Yucatecan "Sopa de Lima" and the larger limon (regular lime). Chef David cut one for us to smell, just to prove that point. 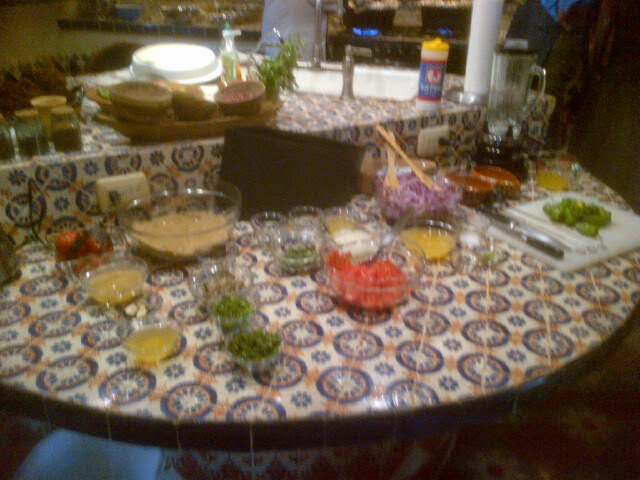 After our "Salbutes"** mid-day snack, we went to work. Chef David guided us in the preparation of a 5-course meal -- all of the ingredients having been meticulously prepped and laid out around the kitchen so that dinner could be served promptly at the end of the day.  It was all hands on deck to work on "Sikil P'aak" (the ubiquitous dip of toasted squash seeds, roasted tomatoes, Seville orange juice and Habanero Chile) and 3 other condiments. Doña Sono and Mario made sure we had our corn tortillas for "Panuchos" in order, as well as the masa-based Bean and Squash Seed Fritters ("Pol'kanes").   Individualized "Caballeros Pobres" (Bread Pudding Souffle w/Cinnamon Syrup and Nuts) were prepared and assembled to be baked just before serving. "Crema de Cilantro" soup and "Arroz Verde" also went into the pipeline. And then came the chicken. 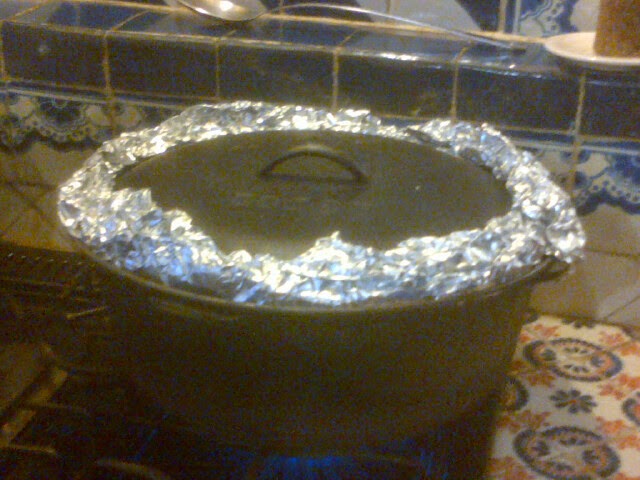 "Pollo Pibil" -- based on the Yucatecan way of smoking banana leaf-wrapped meats in pibs, hand-dug pits lines with stones and fiery coals -- was the pièce de resistance. We readied the chicken breasts with a very tasty Recado Rojo/Seville Orange Juice marinade and made our banana-leaf packets, but did not dig a pit in David Sterling's backyard.  You don't have to go to such lengths either if you employ the stove-top smoking method. Line a cast iron Dutch oven with foil, make a hole in the center of the foil, heat the pot, add wood chips (mesquite in the U.S.), place a cake rack on bottom, stack your banana packets, cover the pot and seal. They went in at 2 and were ready at 3. No fooling around at Los Dos! 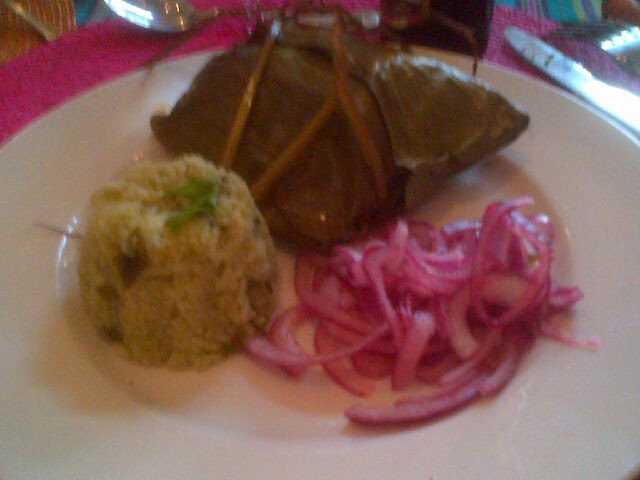 David Sterling was born in Oklahoma City, OK, and "weaned on chili." After a stellar multi-faceted career Stateside, he and his partner took a rather dilapidated edifice -- I saw the pictures -- and turned it into something quite wonderful about 13 years ago.  The Los Dos Cooking School is now the #1 Merida attraction according to Trip Advisor.  Double OPA!

* How big is Merida? It has 3 Wallmarts, but still is quite charming and very interesting. There are also some pyramids nearby, plus natural wonders like cenotes.
**You can pick David Sterling's brain about these fascinating dishes by referring to his 576-page Yucatan: Recipes from a Culinary Expedition, published last year by the  University of Texas Press. Or, by catching one of those new direct flights from Miami to Merida.  Don't dawdle!
Posted by Paula at 11:43 PM